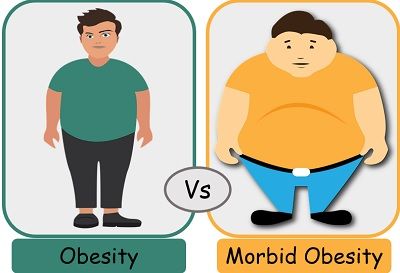 According to the CDC6, the percentage of overweight adult citizens in the United States is around 40.3 percent for persons aged 20 to 39 years old, 46.4 percent for those aged 40 to 59 years old, and 42.2 percent for those aged 65 and beyond. According to 2019 research, one-third of Americans will be overweight by 2030. Almost one person in every four will be morbidly obese. In contrast to many other health disorders classified as obesity, the diagnosis of morbid obesity was not related with any particular relationship to the patient’s age or sex.

Overeating and inactivity are the root causes of morbid obesity.

The definition of medically defined morbid weight is as follows: “a serious health problem caused by an abnormally large body mass, diagnosed by having a body mass index (BMI) greater than 40kg/m2, or a BMI greater than 35kg/m2, or having at least one serious obesity-related disorder, or being more than 100 pounds overweight the ideal body weight (IBW).

The following are the most dangerous obesity-related diseases:

As your BMI and IBW grow, this medical condition may trigger a slew of significant health complications. Morbid obesity may be lethal in certain situations. To express the severity of morbid obesity to patients without appearing harsh and judgemental, medical practitioners have turned away from the phrase “morbid obesity” and instead employed terminology such as “severe obesity” or “class 3 obesity.” This is because physicians and patients often have different definitions of “morbid,” thus, using the same terms may make patients feel more at ease and receptive to getting help.

The key contrast between morbid and obese is the severity of the condition in relation to your weight and BMI. Obesity and morbid obesity may both be harmful to your body and its basic processes. Morbid obesity is the most extreme kind of obesity.

A body mass index (BMI) calculator is a gadget that may be used to evaluate if your weight is within an acceptable range in relation to your height. If you are overweight, you are likely to have an abnormally large body mass for your stature. Excessive food consumption and inactivity of the body might result in weight gain.

The BMI categories used to evaluate weight and health are as follows:

Morbid obesity occurs when a patient weighs 100 pounds (7 stone) or more and has a BMI of 40 or above.

Some Reasons Why Obesity Has Become An Increasingly Serious Problem

Americans are increasingly overweight, and obesity is becoming a national health concern. The issue isn’t merely one of self-control. What has caused obesity to become such a serious problem?

What Exactly Do You Mean By Morbidly Obese? Daily meals function similarly to a bank account in that you deposit calories (income) and spend them on physical activity (expense). Your energy balance will be positive if you consume more calories than you burn. Although this may be advantageous to your money account, it may not be healthy for your physical weight. Of all, it’s not only about subtraction and addition; some people acquire weight more quickly than others. Several variables are at work.

We Have Varied Food Tastes

We Don’t Get Enough Physical Activity

We Have Developed Into a Couch Potato Nation

While these idle acts take away time that might be spent exercising, we also eat meals and snacks in front of the television, which is a key source of promoting this behavior via commercials for high-calorie, unhealthy food products.

Scientists considered weight loss or an increase in terms of calories taken and afterward burnt. It was an issue of weight gain if you ingested more calories than you burned. You lose weight if you expend more calories than you ingest. However, the equation is not that straightforward. Scientists are actively investigating how the source of a calorie affects weight. It is thought that nutritional balance may have a greater influence on weight loss than previously thought. For example, if you consume the bulk of your calories from processed carbs, you may find it difficult to maintain a healthy weight and absorb the nutrients you need. The reason for this is that we need to stimulate the metabolism in order to lose weight and then maintain a healthy weight. Exercise, a balanced diet, and hydration are among the techniques that may assist control of metabolism.

Behavior in What Exactly Do You Mean By Morbidly Obese?

Poor eating habits, such as calorie consumption, may have an effect on your weight. For example, one overweight patient may feel full all day and eat six times, but another may not be hungry and eat just sometimes. Despite the fact that their daily calorie consumption differs significantly, both people battle with weight growth. Making adjustments to your behavior is difficult since these behaviors are often driven by both hereditary and environmental factors.

Weight gain may be caused by a variety of illnesses, including Cushing’s disease and hypothyroidism.

Certain medications (such as antidepressants, steroids, and diabetic medications) may cause weight gain.

Obesity Prevalence In The United States

According to Cheryl Fryar, MSPH, of the National Center for Health Statistics in Hyattsville, Maryland, and colleagues, 42.4 percent of adults aged 20 and up had an index of body mass (BMI) of 30 or higher, and 9.2 percent were obese to the point of being severe, that is, having a BMI of 40 or higher.

Another 30.7 percent of individuals in the United States were overweight, with a BMI of 25 to 29.9.

When the data were broken down by age, persons aged 40-59 had the greatest rates of obesity, with 45 percent of this age group having BMIs of 30 or above. Middle-aged males had the highest obesity rate, at 46%.

Non-Hispanic Asian Americans, in particular, have continuously had the lowest prevalence of obesity, with just 18% and 17% of Asian women and men having a BMI of more than 30 during the most recent time period of the study, respectively.

Mexican American adults, on the other hand, had among the highest proportions, with 51 percent of males and 50 percent of females being overweight. Similarly, 41 percent of non-Hispanic Black men and 57 percent of Black adult females were overweight.

“Although BMI generally uses to evaluate the body’s fat content, body fat may change based on age, gender, race, and Hispanic ethnicity at any particular BMI level,” Fryar’s study noted. “In particular, research shows that health-related concerns may be more frequent in Asian adults with lower BMI than in others.”

The present level of obesity in the United States is in striking contrast to how the nation appeare only a few years ago.

Obesity rates have declined since the turn of the century, yet they are still growing. For example, the only time in the recent 60 years when obesity rates really declined was in 2007-2008, as well as in 2011 and 2012.

Our Approach To Treating Obese Patients With Serious Weight Issues

Many individuals who are obese need surgery to reduce weight and keep it off. The Center for Weight Reduction’s bariatric experts is trained in a range of bariatric surgery techniques, including gastric bypass, sleeve gastrectomy, and sleeve.

The procedure design to reduce the quantity of food you eat and change how food absorb during digestion.

While surgery is typically the most successful way of treating morbid obesity, your doctor will first develop a personalized weight reduction program that addresses both your physical and emotional needs.

In this case, however, they are not doing the same thing. Except that they include BMI numbers from a time when the transition to postindustrial weights was in full swing. When obesity was more widespread than it was throughout the historical era. This was a completely random choice. These present standards are inaccurate because they believe. The weights attained during the obesity pandemic were normal weights.

Finally, many obese and overweight children and adolescents are led to believe their weight is normal when in fact, it is not. The United States should strive to adopt norms comparable to those employed in the Netherlands. For where authorities are less inclined to sit back and let an obesity epidemic expand unabated.

Obesity recognizes as a chronic condition and a public health problem by a number of leading health organizations, including the American Medical Association, the Centers for Disease Control and Prevention, The Society, and The World Federation, among others.

So What Exactly Do You Mean By Morbidly Obese? Semaglutide’s approval was based on the findings of the STEP (Semaglutide Treatment Effects in Patients) clinical study. Which comprise four-phase studies with a total of roughly 4500 individuals. When compares to the placebo group, individuals who got semaglutide injections has that considerable weight loss. Both groups adhered to a low-calorie diet and increased physical activity.

The STEP 1 study findings also revealed that participants who received semaglutide injections lost an average of 14.9 percent of their body weight over the course of 68 weeks. So compares to a 2.4 percent drop in body weight in the placebo group. Furthermore, 83.5 percent of patients in the semaglutide injection group lost 5% or more of their body weight, compared to 31.1 percent in the placebo group.

“This is the first time we’ve seen such a large quantity of weight reduction while using a drug. This approval gives people who are overweight a weekly, non-surgical treatment option that has not previously been seen with an anti-obesity treatment. “In an announcement, Robert Kushner, MD, professor of medical education and medicine at Northwestern University’s Feinberg School of Medicine in Chicago, said, “The approval of this injection represents a key milestone for health care practitioners. For the accepting medical therapy for obesity in order to enhance weight control for chronic patients.”.

According to Novo Nordisk, the most often reported adverse events were diarrhea, nausea, constipation, vomiting, and abdominal discomfort.

Novo Nordisk anticipates that semaglutide injections will be available by June 2021.

The changes in lifestyle that happened throughout the twentieth century had a diverse influence on the four categories of individuals under consideration. The identification of the root causes of long-term trends is beyond the scope of this study; however, it is clear that the “creeping” characteristics of this disease, as well as its persistent nature. It indicates that the disease’s roots are within the social fabric and supported by a plethora of. For diverse sources that were slowly changing during the twentieth century. The American people responded to a slew of impersonal and compelling technical and social causes.

The most outspokenly insistent were:

This is because the fact that obesity began earlier than previously thought suggests that the Centers for Disease Control and Prevention’s weight. The BMI guidelines are incorrect, i.e., not appropriate for assessing the actual magnitude of the epidemic’s impact, particularly on children and adolescents.